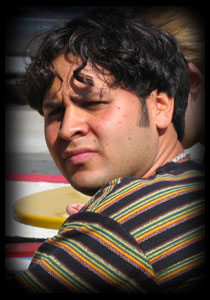 I wrote Waiting For Tomorrow based on my experiences volunteering at a local runaway shelter in Hollywood. After 2 years volunteering at the shelter, I had learned that life on the streets for teenagers, coming from all over the country escaping their pasts was anything but glamorous. Most of the kids were hooked on drugs and were having to rely on stealing, lying, and sometimes prostitution, to get by. With no real support system, their future looked uncertain.

After spending a good eight years working in Hollywood for different production companies, I realized that Hollywood was not at all interested in these kids and their struggle. To most executives, the youth roaming the streets were nothing but a nuisance. Feeling eager to make my first feature film, I began to think about the possibility about telling a story about homeless teenagers in Hollywood. However, I knew that if I was going to make this film, it was going to have to be done completely independently.

From day one, I knew the script had to be simple and to the point. The idea to base it on twenty-four hours came from the idea that a day on the streets can feel like a lifetime when your life hangs in the balance. Finding money to eat and supply your drug habit can lead to life-threatening consequences. Therefore, focusing on the last day in a couple’s life together seemed to be a way to reflect upon a lifetime of mistakes and bad decisions that can only lead to tragedy.

In the end, I think the simplicity of the story and the fact that we went into production with little to no money and no backing from any studio, opened the opportunity to make a film that feels just as raw and dirty as what life on the streets can be like. At the end of the day, I feel the work speaks for itself and whether one can or cannot personally identify with the subject matter, the observer’s view of the streets of Hollywood has been changed forever.